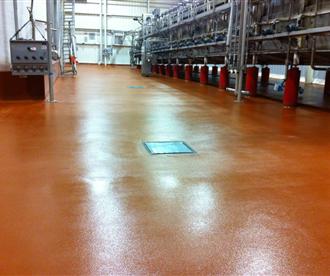 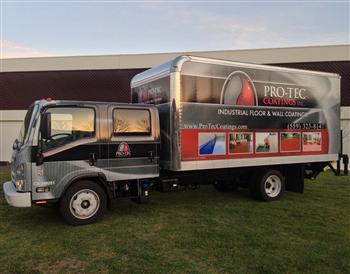 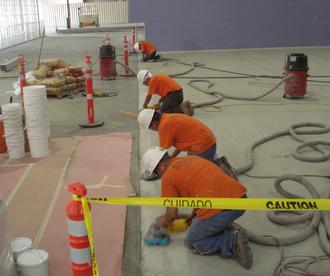 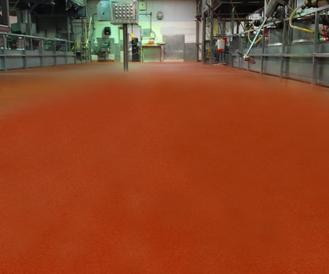 Fast Floor For A Fast Food Giant
By Jen Kramer

El Monterey. Tornados. Chances are, if you’ve enjoyed a frozen burrito, chimichanga, tamale, taquito, or other frozen Mexican food item, you’ve enjoyed one of Ruiz Foods’ many products. Supplying grocery stores, convenience stores, and even schools since 1964, Ruiz Foods is family-owned and

are so popular, that the facility had to expand to keep up with the

“The Ruiz Foods facility expanded out into part of their parking

owner of Pro-Tec Coatings, Inc. “During the winter of 2010, they

Little and Pro-Tec have worked with the Ruiz family for

approximately 15 years. “Originally the factory floors were all epoxy, but they have been slowly converting them to concrete urethane as they’ve discovered that, especially in a food and beverage facility, the benefits far outweigh the old epoxy systems,” Little says. “There is about 50,000 square feet(4,645.15m2) of urethane concrete flooring in the factory now—about 75% of the factory’s flooring—and we installed it.”

He continues, “The epoxy is too susceptible to attack by the lactic acid found in food oils. You can’t have any degradation or holes in a food-grade floor. Ruiz Foods found that maintaining their epoxy floors from attack was becoming a constant battle. They won’t tolerate any sub-standard flooring.” So for the new construction project Little and the Pro-Tec crew, as well as Dur-A-Flex’s Poly-Crete urethane concrete coating, were a natural fit.

The timing of the project’s deadline, however, was more in keeping with a microwave burrito than a flooring project. “We had two weeks, but we had to work around other trades. The scheduling was hectic,” Little says.

The 12-man crew not only had to schedule around other trades,

all the trades had to meet the demands of the burritos

themselves. “What happened was this,” Little explains,

staff took outside orders. The new construction was designed

to fulfill that demand, but what held everything up was the

weather. It rained 40% of the time, and the roof wasn’t finished

when the rain started. Of course we had rain leaking onto our

blaster and 330 steel shot. “We took the floor down to NACE No. 2/ SSPC SP-10 standard,” Little says. “We also used DeWalt 7" (17.78cm) grinders with turbo cupwheels and Metabo 4 ½" (11.43cm) grinders with diamond grinders, both equipped with shrouds from Pearl Abrasive attached for dust control.”

Since the rest of the factory was still in operation, the new room was partitioned off using Visqueen. The crew also used 24" (60.96cm), 13,000cfm high-efficiency fans with attached filter bags from Tempest Fans to control the dust during blasting and grinding operations.

After the impromptu rain storm, Little and his crew used torches and vacuums to dry the concrete and remove any excess water. In order to verify that their freshly blasted and rained on floor wasn’t too moist to coat, the Pro-Tec team used Wagner’s Rapid RH Testing Meter. “We got an ASTM F2170 reading of 77 to 78. The Dur-A-Flex Poly-Crete tolerates installation on concrete with moisture readings of 90 so we were good to go,” states Little.

the crew cut each sidewall of the control joints, cleaning the

joints and removing any debris in the process. Next, they

pre-filled the joints with Poly-Crete, “We mixed, poured, and

them flat with the trowels in preparation for the flooring

To begin the installation process, the Pro-Tec crew set up a

mixing station and an assembly line with five crewmen waiting

on the floor with trowels at the ready. Once the three-part aromatic cementitious urethane was mixed, crew members carrying it in buckets raced to pour it in ribbons onto the floor. “There, our five trowel guys spread the mixture onto the floor, ¼" (0.64cm) thick, making sure that it was flat,” Little describes the process. “In fact,” he continues, “Poly-Crete is the flattest floor in the industry. We use a special porcupine roller to massage and agitate the aggregate and disperse the resin and it becomes perfectly flat. It looks like glass. Then, we broadcast the colored quartz into it to the point of refusal, let the floor cure, come back and sweep up the excess and the floor is done.”

There were, however; a few special touches for this floor. Take for instance
the colored quartz. Little recounts, “We did a custom blend for Ruiz Foods that matches the colors of their El Monterey label. The quartz in this particular floor is a proprietary blend of red, white, and gray called “Monterey’.”

Ruiz Foods also requested the installation of a cove base throughout the room. “Once the floor was installed, we installed approximately 900' (274.32m) of cove,” says Little. Mixing Dur-A-Flex’s clear Cove-Rez epoxy resin with Cab-O-Sil, the crew used trowels to install coving 6" (15.24cm) from the floor up the wall, at a 3 ¼" (8.25cm) radius. “We used quartz to match the color of the floor. Working around the other subs, this

Teamwork requires a great leader too, and judging from this

project, the  Pro-Tec crew really delivers. So the next time you

heat up an El Monterey frozen burrito, spare a moment to think

of the sanitary conditions in which it was manufactured and